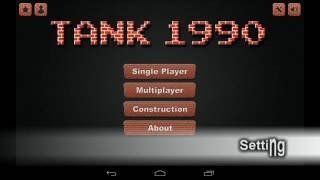 In 1985, NES community enjoyed a nice surprise from Namco, the new game called “Battle City”. It immediately made the gamers crazy with such attractive gameplay focusing on teamwork and strategy. In many countries Battle City became one of the most famous and favorite games, along with household names like “Mario”, “Metal slug”, “Contra”,… Today the name “Battle City” still evokes strong emotion and childhood memories. There was also a updated version named Tank 1990 with more stages and play styles. This game, Tank 1990 (HD) for Android will not disappoint you since the gameplay is the same as NES versions. If you has experienced the “tank game”, it is hard to forget the mysterious excitement with this action genre of early 90s, a great atmosphere for friends and family.

Gameplay is the same: Player(s) will control own tank(s) to destroy enemies and protect the base.

May I use the maps that you shared in the original game? Of course, the name of creators will be displayed.

Some device with low configuration can't play game. Sorry about that :(

glow green magic is a designer clock widget and is for the discerning smartphone owner who demands quality, precision and a unique design style. Personalize your smartphone with a luxury artwork. An elegant blend of classic and modern design style makes the glow green desktop clock widget a special addition to any sophisticated wardrobe. app cont…

★★★★★ over 300 beautiful handmade 3D custom icons HD glow magic is a designer NEXT launcher theme with beautiful HD Wallpaper backgrounds for a high class makeover of your smartphone. HD glow magic theme is made for the discerning smartphone owner who demands quality, precision and a high class design style. 20 special icons, covers the main ap…